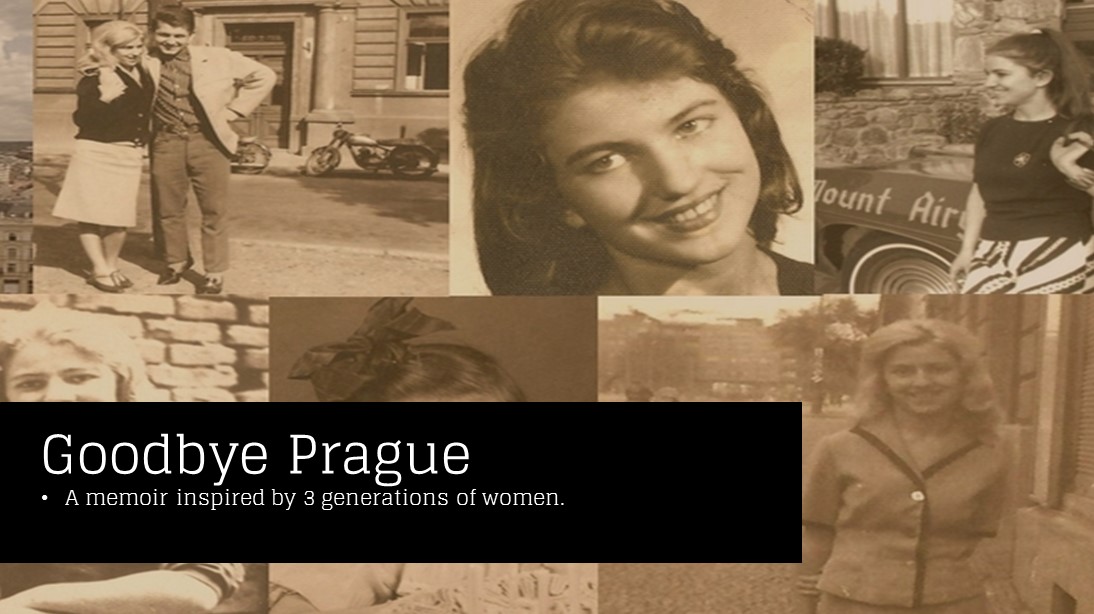 Goodbye Prague began on Mother’s Day when my daughters purchased their grandmother a “Grandmother’s Journal”, a memory journal where she was to write about her childhood. They had high hopes and I wanted nothing more than to have her share the wealth and wonder of her life with them. By the time Father’s Day came around, the journal was empty. My mother is filled with story, but no desire to write. It took my brilliant 13 year old to remind me of what I do. She asked me “Mama, don’t you ask people a lot of questions in your ghostwriting interviews and record their answers so you can write their book?”

“So how about if we ask Grandma the questions from the book and record her answers?”

The following weekend my mother came to stay for 3 days. I had shown my daughters how to record and save the audio files on the computer. Excited, they sat down to record their “Grandmothers Journal” beginning on Friday night. By Saturday afternoon they had finished all of the questions from the journal and wanted to know more so we designed a list of questions catered specifically to what she was talking about very briefly that sparked extra interest.

By Sunday night they had amassed over 16 hours of audio and learned more about their grandmother than they had ever known. They were proud not only of their recording session but of their heritage and of their grandmother’s life journey. They learned about Czech customs and traditions which they had previously not known. They understood the political history and reasons of emigrating in 1968 to escape Soviet occupation and control.

My daughters were astounded at what it was like to grow up in the shadow of World War II and how it affected their great grandparents. They sat in disbelief when they heard that their great grandmother had several children who died of rickets and other such diseases caused by the industrial revolution.

The days and weeks that followed were filled with Google searches, visits to the library and rentals of foreign and documentary films. Their quest for learning the history of their family and culture engrossed them both in a way like I had never before experienced. Suddenly, they were very knowledgeable of their homeland’s history and they shared the information with a new sense of pride.

As I set to the task of transcribing and writing the information in a more organized manner, I, too, began to research the names, dates and places that my mother spoke of. I, too, was surprised to learn of the famous people who gathered at her house. The thought leaders and visionaries, the talented artists and true Bohemians who would carry on with works that would speak of an entire generation of repression and communist rule. An internet search through photographic archives uncovered a photograph of her deceased brother as he sat on a monument during the Prague Spring.

I too began to realize and understand the importance of my mother’s story and the richness of history that filled her life. So powerful were the moments she shared that I called her back for even deeper interviews into the details surrounding specific periods in history and events that changed the world.

Within 3 weeks we had transcribed all of the content and a draft manuscript was born. Three generations of women working together to encapsulate the memory and powerful life experience of a Czech woman who was forced to leave her loved ones behind and go into exile.

What started as a Mother’s Day gift turned into a 6 month project of which the end result is a book entitled “Goodbye Prague” scheduled for publication in early January, 2014.

It brought our family together in a celebration of their culture, traditions, family values and to a deeper understanding of everyone’s personal journey to freedom. It reaffirmed our love for one another and connected us in a way that is indescribable.

The experience was so powerful that it inspired me to write a new book about how sharing the family story together is a great way to leave a legacy for those who follow and I have added Legacy books to the services which I already offer in my business.

The experience is something I would highly recommend for all families.